All our overnight places were great. Looked like Yara had picked them out personally. 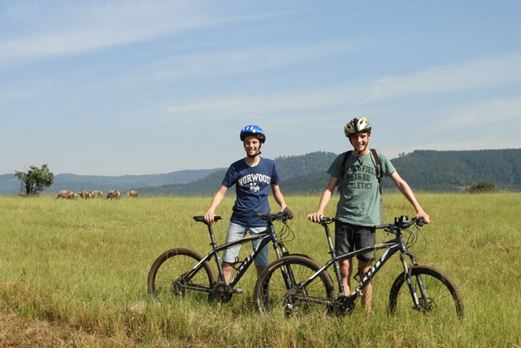 We are now already a week back from our wonderful journey through the east of South Africa.

The necessary weeks of preparation preceded the holiday, in which Hanneke always helped us fantastic. Every question was answered quickly and the tips she gave came in handy. Your organization is very helpful and customer-oriented and we are very pleased with how we have been helped to realize this wonderful journey.

On Saturday we flew to Johannesburg and that evening we were picked up nicely by staff from the Safari Club. When we arrived we had a nice drink outside, before we went to sleep in our huge family room. After a pleasant conversation with the owner, Bobo campers picked us up exactly as agreed at half past nine. Once arrived, our camper was ready for an explanation. After completing the paperwork and explaining the operation, we were on the road. The camper was an older Iveco, but everything worked nicely. Diagonally across the street from Bobo is a large supermarket and we immediately stocked up food for a few days. We also bought a small barbecue, which we regularly used during our trip.

Our first destination was the Blyde River Canyon with the Panorama Route and the Waterfalls Route. In short, off to Sabie. At Merry Pebbles resort we planned the 1st night. Due to the many road works, the journey took longer than hoped, but around 5 p.m. we arrived at the campsite. We were allowed to find a place for ourselves on this beautiful campsite and in the evening the barbecue went on and we enjoyed the evening under the stars.

We woke up from the screaming ibises at the campsite and after a nice breakfast outside we set off.

Near the campsite we first visited the Lone Creek fall and then the Bridal Veil fall.

Along the way we ended up in a demonstration of striking employees at a local wood factory, but the dancing and singing strikers proved to be very friendly and we were quickly let through.

The rest of the day went together with visiting waterfalls and viewpoints. We particularly liked Bourke’s luck potholes. Even though it is the most touristy, it is wonderful to see how the power of water can create such beautiful shapes in rocks. Because it was quite hazy, we did not have beautiful views everywhere, such as at God’s Window, but we enjoyed the surroundings to the full.

That evening we made a bivouac at the Blyde River canyon resort. This turned out to be a very large holiday park, but the camping area is set apart under beautiful trees. Because we didn’t feel like cooking ourselves, we decided to try the restaurant. For the first time this holiday we discovered that you can eat fantastic in South Africa. There was a large buffet, where we had a delicious dinner.

The next day we slept well and after we had visited the viewpoint on the Three Roundavels, we set course for the Kruger Park.

The road went through horticultural areas to the Abel Erasmus pass. Along the way you have to watch out for all goats and cows that just walk along the road. Everywhere you see stalls where the poor locals try to sell their wares.

Just after noon we entered the National Kruger wild garden via Orpen gate. We expected that upon arrival we would be informed extensively about the rules of the park, but after we received a leaflet in our hands, we could just drive inside. We had already purchased an extensive visitor’s guide in the Netherlands and it came in handy. It is highly recommended to purchase it in advance, because nothing was for sale at Orpen itself. Later, similar visitor guides were seen in the rest camps.

After a fifteen minute drive in the park we had already seen the first giraffes, zebras and antelopes! What a party. The rest of the day we drove via asphalt and unpaved roads towards the Satara rest camp. We saw Kudus and at a watering place Waterboks and zebras, had to brake because a couple of giraffes were crossing in front of us.

When we arrived at Satara we were able to find a spot on the campsite. Time for a beer and just let everything sink. At the fence we enjoyed the sunset, while a hyena roamed right in front of us.

At night we heard the lions roar. The next morning we drove out of the gate at 6 am, facing the sunrise.

We had looked the day before where lions were spotted that day and headed that way. And indeed, after fifteen minutes of driving we saw a group of 6 lions on the road. They were young males and females and apparently they were bulging out a little after a successful nightly hunt.

At 9 o’clock it was time to have breakfast. At a watering place we found a suitable place to make breakfast. That is the advantage of the camper. Safe in our house on wheels we enjoyed breakfast while we saw a hippo and several birds in the drinking place. The little ones immediately went into hiding, while the larger females kept an eye on things and quenched their thirst.
After 20 minutes the leader of the group thought it was nice again, gave a sound signal and the group started moving again.

The following 2 days we enjoyed all the wildlife we saw in the Kruger. Of the big 5 we were able to cross 4, only the leopard did not show itself. We never expected to see so many and so many different animals. Lower Sabie was the nicest rest camp where we spent the night. This is beautifully situated on the Sabie River. From the large terrace of the restaurant we had a view of hippos, crocodiles and migrating elephants and giraffes. At Berg en Dal we saw the rare southern ground hornbill and a rhino (no. 4 of our big 5).

But Kruger came to an end, because we had to continue. Off to Swaziland!

When we arrived at Jeppe’s Reef border crossing, we first had to go through South African customs. Soon we had our coveted stamp and we could proceed to the customs of Swaziland. We first had to score a stamp at the customs, before we had to pay a counter further. After fifteen minutes we had collected all the stamps and we could enter Swaziland.

What we noticed were the countless speed bumps. Here too you see a great contrast between rich and poor. Along the way here too the countless people, stalls and cattle.
At the end of the afternoon we arrived at the Mlilwane reserve. The last 10 km there was old-fashioned unpaved bump and bumpy weather. The part from the entrance is surrounded by zebras, impalas and warthogs. The zebras and impalas walked by in front of the camper and in the evening we ate on the water under candlelight.

The next morning we made a nice bike ride among the animals.

Once back in the camp we had earned an ice cream and then it was time to head to South Africa again. We left Swaziland at the Golela border crossing and that evening we were at the Bushbaby lodge campground. Because we were going to visit the Hluhluwe wildlife park the next morning, the alarm clock was very early again. in the park we saw a white rhino. We spent the rest of the day crossing the game reserve. We saw the famous animals such as impalas, zebras and baboons.
We also saw a herd of elephants who were clearly not charmed by the fact that a safari jeep had come too close. The rear elephant of the group made it clear, loud and honking, that the jeep had to be gone. A good reminder that you should always take good care of you and never become overconfident.

After a day full of new impressions we drove to St. Lucia. We were welcomed by a nice security guard at the Sugar Loaf campground. We had read beforehand that this was a bit of a dirty, worn out mess. However, this was not so bad. The campsite was completely full, because the South Africans were free for a long weekend, but all the sanitary blocks were neatly cleaned.
That evening we ate opposite the campsite at the Ski Boat club, a very cozy restaurant with a relaxed atmosphere. The next day we could sleep in again and after a nice breakfast outside we went to visit the iSamangaliso wetland park. We drove from St. Lucia to Cape Vidal. Here too we saw all kinds of animals, the highlight being two young white rhinos.

Later that afternoon we made a boat trip with Heritage tours. With the small boat we sailed a bit up the river and saw crocodiles and hippos. Especially the baby hippos and the wildly frolicking adolescent hippo.

made an impression. The screaming African osprey were also very beautiful.

The guide told us a lot of information.

At sunset we came back full of impressions and at the Ski Boat Club we could enjoy the nice day while enjoying a beer.

At Salt Rock we spent the next 2 days on the beach. With a beautiful view of the sea, we sat at the barbecue under the palm trees. We swam in the landscaped tidal pool, over which the waves crash. In short, they were a few wonderfully relaxing days.

But time was running out, because the end of the holiday was approaching. We set sail for the Drakensberg, where we were heading towards autumn. What a beautiful setting !! Our last night was at the Dragon Peaks mountain resort. What a beautiful place this was!

We had a very nice view of the Drakensberg, made a nice walk in the area and enjoyed the more than good restaurant at the campsite of fresh trout. returned the camper to Bobo in the afternoon.

We were warmly welcomed and after administrative duties we were taken to the Southern Sun hotel at the airport, where we could relax for a few more hours, until around 8 o’clock we went to the airport for our night flight to Schiphol.

The holiday was over. At home we were able to pick out more than 3000 photos and enjoy all our impressions we have gained in beautiful South Africa. Hanneke, thank you very much for all the tips and information. Thanks to your help it is

The accommodations were fine, although some were "fairly basic" (especially the stay at the Pretoriuskop rest camp).