Johannesburg is also known as Jo’burg or Jozi. This rapidly changing city is the heart of South Africa! After having had a bad reputation for almost 20 years, Johannesburg has now completely changed! There are now hip neighborhoods, such as Maboneng, with nice restaurants and bars.

During this day tour you will learn, under the guidance of a local guide, about the past and contemporary life in the largest city in South Africa. You will visit Constitution Hill and the Apartheids Museum and enjoy the view from ‘Top of Africa’. A varied day full of history and culture. 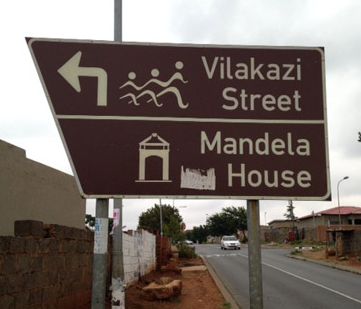 This day tour starts at 9:00 am to 9:30 am. You will be picked up by a guide at your accommodation in Johannesburg or at OR Tambo Airport. The excursion lasts around 9 hours, so you will be dropped off around 6:30 pm. The group consists of 2 to 12 people. Do you prefer a private driver during your excursion? Then contact us.

The first known ‘building’ you will encounter along the way is the football stadium that was built for the 2010 World Cup. The first stop is Vilakazi Street, perhaps one of South Africa’s most famous streets. It is even the only street in the world where two Nobel Prize winners – Nelson Mandela and Desmond Tutu – have lived. Archbishop Tutu still has a house there. The former house of Mandela is now a museum (a visit to this museum is optional and for your own account).

The Hector Pieterson Memorial is named after the first victim of the 1976 uprising. During a protest march of thousands of children, protests were made against the exclusive use of Afrikaans in schools. The security police tried to disperse the mass with tear gas. When that did not work, a shot was fired. The photo of the 12-year-old Hector Pieterson, shot in the arms of a fellow student, went across the world and became the symbol of the fight against Apartheid.

After lunch (for your own account), the tour continues. To close the section in Soweto, visit the Apartheid Museum. This museum is perhaps the most interesting and moving exhibition in the whole of South Africa. Here you get a multimedia tour through the terrible history of Apartheid. Upon arrival you will receive a card on which your ‘temporary’ variety is stated: white or not white. You are immediately confronted with ‘separate’ entrance gates. You follow a different route through the museum for each race. You make a journey through time. From the beginning of apartheid to the fall of 1994. The year in which Nelson Mandela celebrated victory.

Please note: The Apartheid Museum is closed on Mondays.
At Constitiution Hill you will learn more about the history of South Africa. This special building is a living museum about the turbulent past. Part of this is the Old Fort Prison Comples, a notorious prison, where Nelson Mandela has also been imprisoned. The Constitutional Court, established in 1994, is located in the eastern part of the complex.
The day ends with photo opportunities at Nelson Mandela Bridge, Mary Fitzgerald Square and literally a highlight when you go to the top of Carlton Center. This 50-storey and 223-meter high tower is the tallest building in Africa. From the roof terrace ‘Top of Africa’ you have a magnificent view of the city.

After this interesting and impressive day full of culture and history you will be brought back to your accommodation or to the airport. The precise route depends on the weather and the collection addresses.