During this half-day Soweto Township Tour you will learn about the past and contemporary life in the most famous township of South Africa under the guidance of a local guide. An impressive morning, full of culture and history!

Soweto – South Western Townships – is actually a contraction of 38 different townships and is the most famous slum of South Africa. In 1904 the first people came to live in the area southwest of Johannesburg. The real growth, however, took place in the fifties and sixties. The South African apartheid government decided at the time that white people were only allowed to live in Johannesburg. Blacks, colored people and Asians had to move to the townships for their ‘race’. In the following decades, these districts merged into the current city of Soweto with over four million inhabitants and an area of 135 km2. All eleven official languages of South Africa are spoken in Soweto.

Today the township is a lively mix of old slums, new renovated streets with music and restaurants and African street life. The township is undoubtedly the most important symbol of South African apartheid history. The accumulation of poverty-stricken miners, segregation, the struggle for freedom: the South African political line has taken place in Soweto. During this tour with your guide, this history will pass by itself. 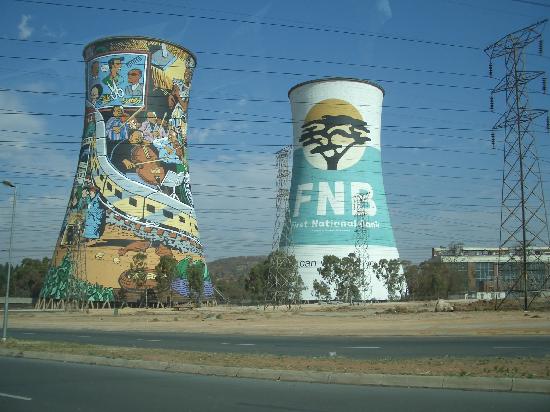 This day tour starts between 9 a.m. and 9:30 p.m. You will be picked up by a guide at your accommodation in Johannesburg or at OR Tambo Airport. The tour lasts 4 hours, so you will be dropped off around 1 p.m. The excursion takes place in a group of 2 to 12 people.

The first stop is the Soccer City Stadium which you may know from the World Cup in 2010. South Africans love football and this stadium plays an

important role in the social life of the people in Soweto. In addition to football, the stadium has a meaning. In 1990, after his release, Nelson Mandela gave a speech and during the football final in 2010 he was present again. After Mandela died on December 5, 2013, a memorial meeting was held here on Tuesday, December 10.
Vilakazi street is perhaps one of South Africa’s best-known streets. It is even the only street in the world where two Nobel Prize winners – Nelson Mandela and Desmond Tutu – have lived. Archbishop Tutu still has a house there. The former house of Mandela is now a museum.

Optionally you can have lunch at a shebeen in Vilakazi Street (± R75 p.p.) or at a restaurant with buffet (± R150 p.p.). Lunch is not included in the price for the excursion, consult with your guide about the possibilities.

The Hector Pieterson Memorial is named after the first victim of the 1976 uprising. During a protest march of thousands of children, protests were made against the exclusive use of Afrikaans in schools. The security police tried to disperse the mass with tear gas. When that did not work, a shot was fired. The photo of the 12-year-old Hector Pieterson, shot in the arms of a fellow student, went across the world and became the symbol of the fight against apartheid.

After this your guide will stop at one of the shacks and continue on foot through the slum. You get a good picture of the daily life of the people in the slums. Because your guide knows the township well, this walk is completely safe.

The tour continues along the Soweto Campus of the University of Johannesburg. Here you can take a closer look at the beautifully painted cooling towers of the old power plant, which used to supply Johannesburg with electricity.

After this interesting and impressive day full of culture and history you will be brought back to your accommodation or to the airport. The precise route depends on the weather and the collection addresses.